Alan Rowan talks about ‘Into Thin Air’ by Jon Krakauer, an acclaimed account of a disastrous expedition on Mt Everest, which inspired the 2015 feature film ‘Everest’. “Ranks among the great adventure books of all time.”

If you’ve ever wondered about man’s obsession with climbing the world’s highest mountains, this book perfectly captures the essence of that obsession and what happens when it clashes head-on with the unstoppable force of nature.

The conditions were perfect on Everest when five expeditions launched an assault on the world’s highest peak on May 9, 1996. Twenty-four hours later they were fighting for their lives as a ferocious storm swept in to leave them trapped in the Death Zone above 26,000 feet.

Jon Krakauer had been along mainly as an observer on a commercial expedition but got so swept along in the excitement and emotion of the whole expedition he ended up going for the summit. He was one of the lucky ones.

A combination of errors of judgement by experienced guides, bad luck, and confusion caused by thin air and sub-zero temperatures ended in the deaths of eight climbers. But Krakauer’s eye-witness account also reveals some extraordinary acts of courage in the ultimate fight for survival.

Alan Rowan is a journalist, lecturer and mountain fanatic. Author of Moonwalker: Adventures of a Midnight Mountaineer. 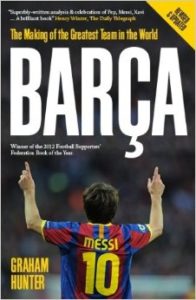 Now Read Arild Stavrum on Barca: The Making of the Greatest Team in the World