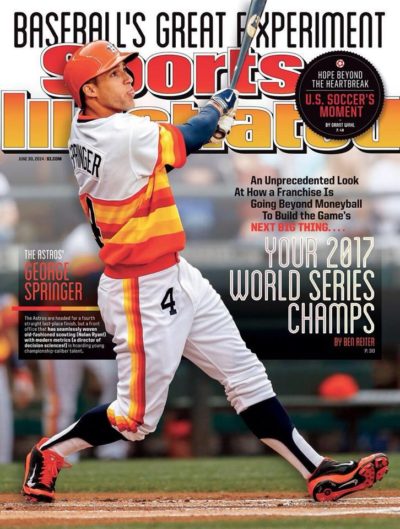 In 2014 Ben Reiter wrote a cover story for Sports Illustrated. The headline ran: Your 2017 World Series Champs. The picture was of George Springer, then a rookie for the Houston Astros, then the worst team in baseball and maybe the worst in the history of the sport.

“I’ve written 21 cover stories and from the moment this came out it made a splash like no other,” says Ben. “People were mostly outraged.”

This is a story of a sports organisation that took a long-term view in a short-term industry and stuck by their guns when they were under attack. if you enjoy the podcast, why not read the original article Ben wrote in 2014, when the Astros were a laughing stock. It’s an extraordinary story, brilliantly crafted, and tells us plenty about both big sport and the writers who tell these stories.

Then this, one of many pieces looking at the prediction from a 2017 perspective, with the Astros on top of the world and Reiter not far below them.

Let us know what you think of the podcast by email – backpage@backpagepress.co.uk or @BackPagePress on Twitter. And if you like it, please recommend it to people you think would share that view, and leave a review on iTunes. Thanks.

Now Read NEW PODCAST! Between the Lines: The Stories Behind Great Sports Writing