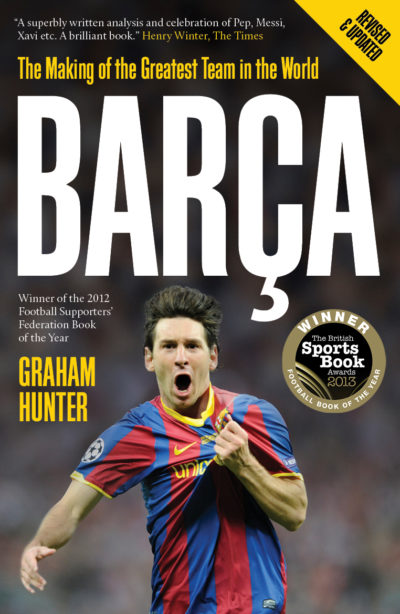 UPDATED 2016 EDITION
This edition – with a new jacket featuring Lionel Messi’s iconic celebration in the 2011 Champions League final at Wembley – contains a substantial new epilogue containing a fresh perspective on the end of Pep Guardiola’s reign at the club; the transition to Tito Vilanova as head coach and the tragic death of Pep’s former assistant from cancer. There is also a new section on the brief reign of Tata Martino and a reflection on the untimely passing of Johan Cruyff, the Godfather of the modern Barca era.

Barca has already become a classic of modern sports literature. It tells the story of the incredible Guardiola era at the Catalan Club – between 2008 and 2011, in which they won 14 out of 18 trophies – culminating in that Wembley victory over Manchester United. From there, we focus each chapter on one of the iconic personalities of this team, telling its story through them, from its genesis in the late 1980s to their coronation in London: Guardiola; his mentor, Johan Cruyff; Xavi; Andres Iniesta and Messi, perhaps the greatest footballer of all time

Graham Hunter moved to Barcelona in 2001. He is a journalist of international reputation and covers Spanish football and FC Barcelona for Sky Sports, the BBC and newspapers and magazines across the world – for exclusive content visit grahamhunter.tv.

This could well be the best football book ever written– Kevin Bridges
Fantastic book. It's can't-put-down good– Oliver Holt, The Daily Mirror
Unmissable– Juliano Belletti, former Barcelona player
Comfortably slots into the top 10 of my all-time sports books– Brendan Crossan, The Irish News
An instant classic– Grant Wahl, Sports Illustrated
No one knows Barcelona like Graham Hunter. Penetrating, convincing and fascinating– Sid Lowe, The Guardian
Pep Guardiola once said to his team that Andres Iniesta would retire them all. Graham Hunter has retired all of us who aspire to write about this team– Rob Draper, Mail on Sunday
One of the finest books written on football– Alan Pattullo, The Scotsman
An access all areas pass to the greatest football story of modern times– Hugh MacDonald, The Herald