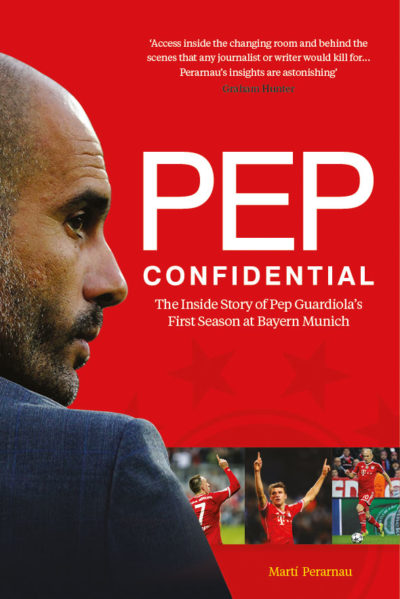 ‘Write about everything you see. Be as critical as you like’
Pep Guardiola to Martí Perarnau, summer 2013

Martí Perarnau was given total access to Bayern Munich during season 2013-14. This book represents the first time in the modern era that a writer has got this close to one of the elite teams of world football.

At the invitation of Pep Guardiola, he shadowed the Catalan, his staff and his superstar players during training and on matchdays. Bayern smashed domestic records on their way to the double, but were humiliated by Real Madrid in the Champions League semi-final. Perarnau was with them every step of the way.
Perarnau is with Guardiola as he is courted by the world’s greatest clubs during his sabbatical in New York. We hear Guardiola explain in detail the radical tactical moves which transform Bayern’s season and reprogramme the players who will win the World Cup with Germany. Perarnau talks exclusively and in fascinating detail with players such as Arjen Robben, Manuel Neuer, Philipp Lahm, Thiago Alcântara and Bastian Schweinsteiger.

Pep Confidential is much more than the story of a season it is also a lasting portrait of one of the greatest coaches in sport.

Martí Perarnau, former Spanish Olympiad turned journalist, is a renowned football analyst. He writers for a number of Spanish newspapers and runs the hugely popular Perarnau Magazine blog. He lives in Barcelona.

Brilliant insight into the workings of a genius– Four Four Two
Access inside the changing room and behind the scenes that any journalist or writer would kill for . . . Perarnau's insights are astonishing– Graham Hunter
The author has the sort of access that causes the jaw not only to drop but bounce off the floor. Perarnau follows Guardiola onto the training ground, into the dressing room, onto the team bus and even into the club restaurant. He emerges with not only a portrait of Guardiola that is undoubtedly authentic but he provides an insight into how huge clubs operate and how even the greatest of players are beset by neurosis.– Hugh MacDonald, The Herald