What do you know about Diego Costa? When the striker arrived at Chelsea last summer, Jose Mourinho described him as a “made player – an end product, a complete striker”. But before he ripped up the Premier League; before he bulldozed La Liga defences during Atlético’s championship season – two reigns of terror  stopped only by a shredded hamstring – it was a very different story. You can read all about it in a new biography, Diego Costa – The Art of War, out at the end of this month.

One of the great challenges of modern sports writing is to find virgin territory. Costa’s story was full of unexplored hinterlands – his career path could scarcely be more different from his peers at the top of the game.

We wanted to know more about his upbringing on the streets of Lagarto, Brazil; why he spent years on loan at clubs in Portugal and Spain – and what happened there; what the catalysts were for his eventual success at Atletico Madrid; and why he chose Spain over Brazil.

We found the answers to all these questions and more in Fran Guillén’s definitive biography of the Chelsea striker, which we will co-publish with Arena Sport on July 30. Guillén is a well-respected Spanish football writer with very close ties to Atlético Madrid. He has left no stone unturned in retracing the steps of Costa.

Guillén has been everywhere, spoken to everyone and written a compelling portrait of one of the most charismatic and complex personalities in world football.

Diego Costa, the Art of War, will be out on July 30. It is a co-publication with Arena Sport.

Click on the cover image below for pre-order information. 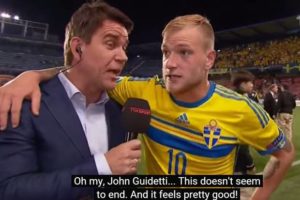 Now Read Guidetti vs Hester – who is the king of the hyped-up post-game interview?