A couple of years ago we published a book called Football Manager Stole My Life. This project was a leap of faith. We knew the game was hugely popular, but we didn’t know how it had permeated into people’s lives. There were stories to tell.

And so it goes on. Today on Twitter – the very day that a Football Manager documentary is shown at Vue cinemas across the UK and on international television – the fortunate got to witness a beautiful snapshot. A young man, let’s call him @MitchEast1, was at his university library when he noticed a young woman, as young men in university libraries are wont to do.

Upon closer inspection, her laptop display was busy not with the decline of the Roman Empire, or anything to do with “science”, but with Football Manager. Yes, friends, this one was a keeper.

At Uni….in the library…looking at a girl…she’s playing @FootballManager at what point do I go over and tell her I’m in love? @milesSI

Copied in were Miles Jacobson, overlord of Sports Interactive and the Football Manager team, and the official FM account at SI. After they responded and retweeted, we were off to the races.

Romance, hope and humour – three essential elements in the Football Manager devotee – were soon evident from those following the story, as #DareToMitch began to trend on every FM player’s timeline.

The language of love, we discovered, was closely related to the language of the dug-out. And as you can tell from that last line, there is also endless scope for off-colour puns, but that’s not important right now. Here are some of the best bits:

@FootballManager @Mitcheast1 check to see if she quits and re-loads after a bad result. If she does, she can’t be trusted.

@Mitcheast1 @FootballManager @milesSI Check who she manages first. If she’s gone lower league, get in there.

Our young hero was soon moving through the gears. First, he got close enough to see who his signing target was playing (Arsenal) and then took a seat nearby.

@Mitcheast1 @FootballManager Where are you both placed on the table? Will it be a classic six-pointer? #DaretoMitch

But then, with everything to play for, and after initial enquiries had been made, the laptop was closed and the mystery manageress was gone.

I didn’t bottle it, she closed her mac so I had to make a move. Even if she’s not back today, same again next Tues! #DareToMitch

There was, as there had to be, some post-match team-talking.

@Mitcheast1 Assertive: “Putting the result aside, that was a pleasing performance.”

And even the brief emergence of #MitchOut, which seemed at once harsh, and perfectly reflective of modern football.

We don’t doubt that the boy Mitch shows a lot of promise, even if his finishing needs some work. He’s promised to be back in the library for the second leg of this love match, next week.

One question….next Tuesday, is it my cup final? Do I wear a suit? 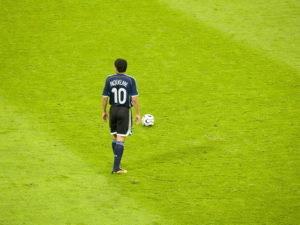