I USED to count the days until Jonathan Northcroft left the country. This is not a slight on the man himself. It’d be hard to meet a finer fellow in journalism. You see, around the early noughties, Jonny was working for Sunday Times Scotland as their chief football writer. Rumour had it that he was moving to a north of England beat, which would lead to a reshuffle on the Scottish desk.

Fresh out of Uni, I was lined up to come in the bottom end, if Jonny left at the top. In the end, the wheels turned so slowly that I moved to Edinburgh to take a job with a sports agency. Eleven months later I did move to Sunday Times Scotland, with Jonny having finally flitted south.

As a young sports writer, I would consistently read Jonny’s stuff and think: ‘what a great feature idea’ or ‘that’s a brilliant intro’. Put simply, he understood football and wrote about it lucidly.

Fast forward to this year and we had been talking to Jonny about possible projects. This was before the World Cup. During the tournament, Jonny had been posting daily blogs on his Facebook page. When I say blogs, they were 1500-word features covering some behind-the-scenes stuff from the England camp and his take on other issues like VAR, Messi v Ronaldo and the challenges faced by a journalist covering a major tournament.

About a week into the tournament I said to Neil – the other half of BackPage – ‘Have you been reading Jonny’s stuff on Facebook? You need to check it out’. The next morning an email popped up from Jonny: ‘Getting great feedback from these blogs. Do you think they could make a book?’

Serendipity… ‘Deadlines and Darts with Dele’ was born.

So, let Jonny take you back to the long, hot World Cup summer of 2018…

Deadlines and Darts with Dele will be published in paperback and ebook on October 8 2018. Pre-order links below 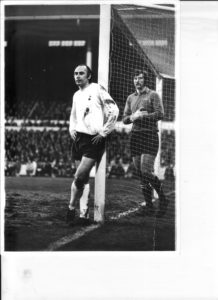 Now Read Tribute: How a leap of faith propelled Alan Gilzean to the heights of the game