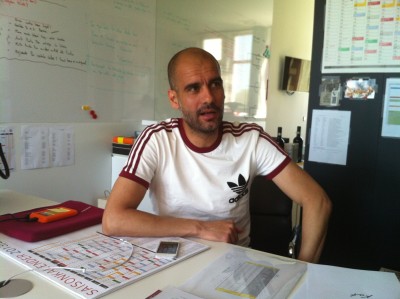 MARTI PERARNAU was given total access to Bayern Munich during Pep Guardiola’s first season, 2013-14. The result is an astonishing behind-the-scenes book, Pep Confidential: The Inside Story of Pep Guardiola’s First Season at Bayern Munich, which we have co-published with Arena Sport today.

We asked Marti – pictured below with Pep – 10 questions on the book. Here are questions one to five. Part two will be published on the blog tomorrow…

1) Why did Pep decide to give a writer such access at this point in his career?

Several factors converged simultaneously: David Trueba, a very good Spanish film director is a close friend of Pep. He said it was a shame not to have recorded the great moments lived inside the Barcelona dressing room. At that time I came along with my project about Bayern and the endorsement of Manel Estiarte, with whom I had been an Olympic colleague.

Pep thought there was a chance to make an exception to the rules and allow entry to someone who was an ex-sportsman and who, perhaps, could explain how his football team worked. So we made the deal and then I had to earn the trust of Guardiola and be honest with him.

2) Tell us one thing about Pep Guardiola that most people won’t know?

The biggest surprise is that most clichés that exist about Pep are not true. He’s not a romantic manager, not poetic or aesthetic. He’s a very competitive coach who wants to win and will change his usual playing style if it would improve the team. Lorenzo Buenaventura, Bayern’s physical trainer, defines him with a very exact phrase: “Pep is not a fan of himself.” He has an open mind to all kinds of knowledge.

3) Other than Pep, who was the most interesting character you came across in the book?

Probably the agent of Philipp Lahm. He is called Roman Grill and was a player for Bayern reserves many years ago. He also coached when Lahm started playing. Grill is a very intelligent person with a great knowledge of football. He saw Guardiola’s tactical movements before anyone else and is also a character who speaks very clear and does not hide behind diplomatic phrases.

4) Having your access would be a dream for every fan or journalist – what was your favourite moment during the season?

The most exciting moments were always the post-game time when Guardiola expresses all thoughts of what happened in the games.

5) Which Bayern player impressed / surprised you most in terms of attitude and personality?

Philipp Lahm and Arjen Robben. The captain is a very quiet and serious player, who used to remain quite unnoticed until the team needed him to talk or act. In these cases Lahm demonstrates a very big personality. Robben is always playing with his three children and behaves like a great parent. He is very polite and friendly and also he’s very ambitious as a player. 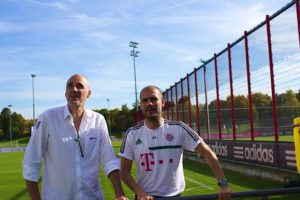