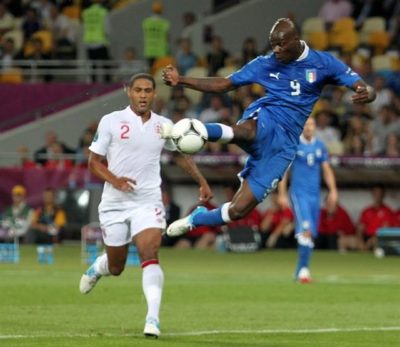 As Mario Balotelli heads for Liverpool and a return to the Premier League, here is what Andrea Pirlo had to say about his Italy team-mate in his autobiography, I Think Therefore I Play – his fight against racism, his reaction to in-game provocations and how, according to Pirlo, he could play for any club he chooses.

We need Mario Balotelli. I’m not sure he really appreciates it yet, but he’s a special kind of medicine, an antidote to the potentially lethal poison of the racists you find in Italian grounds.

They’re a truly horrendous bunch, a herd of frustrated individuals who’ve taken the worst of history and made it their own. And they’re more than just a minority, despite what certain mealy-mouthed spin doctors would have you believe. Those guys would use a fire extinguisher to put out a match.

Whenever I see Mario at an Italy training camp, I’ll give him a big smile. It’s my way of letting him know that I’m right behind him and that he mustn’t give up. A gesture that means ‘thank you’.

He’s often targeted and insulted by opposition fans. Let’s say that the way he goes about his business perhaps doesn’t help him get much love, but I’m still convinced that if he was white, people would leave him in peace.

‘Jump up high so Balotelli dies’ is an unspeakable chant that, sadly, I’ve heard at the Juventus Stadium amongst other places. Even worse are the monkey noises that I’ve listened to pretty much everywhere.

But instead of depressing Mario, moronic behaviour of that kind actually seems to fire him up. He won’t let this human trash get their way, and it’s the most intelligent response because if you listen to what a stupid person says, you elevate them to the position of interlocutor. If you simply ignore them (still acknowledging that, unfortunately, they exist) you’re leaving them to stew in their own polluted sea: one where there are no friends and no shore. The good news is that even sharks can die of loneliness after a while.

Cesare Prandelli gave us national team players some firm direction on the matter. “If you hear people in the stands disrespecting Mario, run over to him and hug him.” In that way, hate can be cancelled out by an equivalent dose of love.

Not a fashionable choice, but a pretty forceful idea.

I’m happy that Mario is the way he is. He’ll react (wrongly) to provocation on the pitch, but doesn’t let what’s going on in the crowd affect him. If he scores, he might put his finger to his lips to mock the opposition fans, something that really infuriates them, but if they tell him he’s got the wrong colour of skin he’ll simply laugh in their faces. He makes complete fools of them and emerges a convincing winner. The way I see it, he’s capable of becoming a symbol of the fight against racism, both in Italy and throughout the world.

In terms of footballing ability, Mario’s class is unquestionable. I’d have happily seen him end up in a Juventus shirt. Top players are in a position of real strength, in that they can basically pick their club.