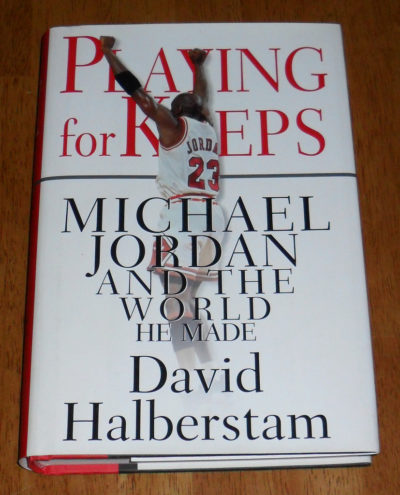 In the first of a new series, Neil BackPage talks about his No.1 sports book, a brilliant document of Michael Jordan’s unmatched career in the NBA by the Pulitzer Prize winner David Halberstam.
‘He tells us the story of a talent that stopped hearts and took flight.’

I was looking for a book on Michael Jordan. I had never heard of David Halberstam. I got lucky.

Jordan was the pioneer of the NBA’s global push; he took Nike over the top; he made a movie with Bugs Bunny.  And he was the greatest athlete of the 20th century.

Halberstam was a Pulitzer Prize winner; he reported from the Vietnam War and inside Kennedy’s Camelot. He also put together some of the best sports books ever written, including many people’s No.1, The Breaks of the Game.

Halberstam v Jordan. A clash of titans. They never meet.

Halberstam rarely quotes. He hardly analyses. He reports. He has interviewed and researched and he tells us the story of a talent that stopped hearts and took flight. Of a father and a son. Of sport smashing into big business in the 1980s and forever. Of immortality real and imagined.

Neil White is a co-founder of BackPage.

Read Halberstam on Jordan from The New Yorker magazine, 1998.

* Review your favourite sports book in 150 words or less. Email it to backpage@backpagepress.co.uk and we’ll put the best contributions on the site