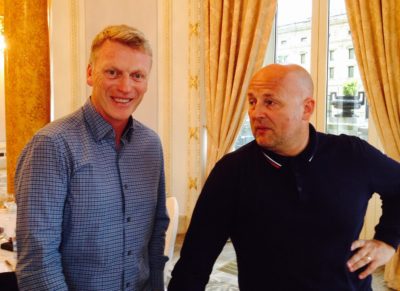 The locations for recording the Big Interview podcast are always determined by what best suits the interviewee. Graham chatted to Gary Neville in a production suite at the Sky offices in Isleworth, Middlesex.

It fitted in with Gary – who disappeared afterwards to put the final touches to Monday Night Football – and also Graham, who was appearing on that evening’s Revista De La Liga. The Jamie Carragher interview was at the same venue, and he also took time out of his preparations for MNF.

Gordon Strachan was in London to do a punditry stint for ITV’s Europa League coverage so, with the help of a friend, Nigel, we secured a room in the coolest office in London on the banks of the Thames, close to ITV’s studios; open plan with ‘creative spaces’ – definitely not ‘conference rooms’ – and a table tennis table. Gordon did a double take as he walked past two workers engaged in a frenetic ping pong rally.

We recorded the Kevin Bridges podcast at the office we share with a company called Freight. It is on the top floor of a historic building in Glasgow’s Merchant City.  Cups of tea flowed and Archie the office dog even dropped in for a pat from the comedy giant.

So far so good. When we got the call a couple of weeks ago to say that Graham had set up an interview with David Moyes in San Sebastian, the stakes were raised. The passports were out, Factor 50 at the ready.

However, when we got there it was raining. Neil BackPage looked particularly miserable. He hadn’t even brought a jacket. “I didn’t sign up for this,” he muttered, as myself and Graham cackled from beneath our hoods.

David Moyes looks 10 years younger than he did during his spell at Manchester United. Much of that is to do with the delights of San Sebastian, with its rolling green hills cascading down to glorious sandy bays. The tapas – or pinxtos – is not bad either. We recorded the interview in the beautifully grand Hotel Maria Cristina. When we woke up the next morning, the sun was shining, another podcast was in the bag and there was nothing else for it but to go to beach (see impossibly smug photo). 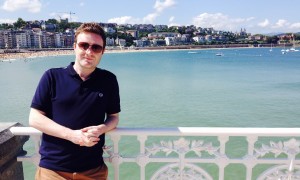 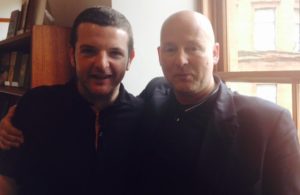